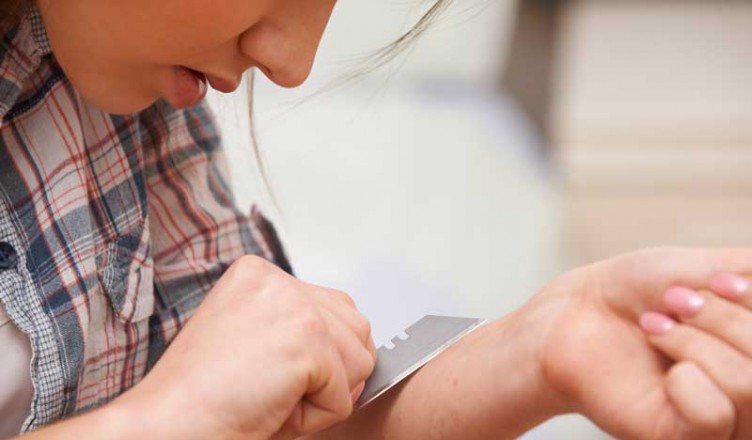 What is Teen Cutting?

Teen cutting is the practice of teens who purposely injure themselves by using a sharp object to scratch or cut their skin deep enough to draw blood. It’s a type of self-injury behavior typically seen more often among younger teen girls, although older teens and boys can also engage in cutting.

Teens usually will cut themselves where they can most easily reach – on arms, legs, and torso. They often take care to cut themselves only in places where their injuries and scars can be concealed by clothing to hide the practice from parents, siblings, and teachers.

Although it’s sometimes done in groups, cutting is typically a secretive behavior. Teens often keep their secret even from their closest friends because they’re embarrassed and ashamed.

If their injuries are noticed by a friend or family member, those who cut usually offer a rational explanation, like “I was playing with the dog and he got too rough,” or “I fell and landed on some broken glass,” to continue their deception. (1)

Why Teens Cut Themselves

It’s usually hard for parents to understand why their teen would cut himself or herself on purpose. According to therapists, teens cut themselves for several reasons. Among them:

Teens who cut themselves lack coping skills to deal with strong emotions, intense stress, or relationship problems. Without healthy ways to deal with what they feel inside, tension builds up to an unbearable level until the teen seeks physical relief through cutting himself/herself.

Those who cut don’t intend to injure themselves seriously or permanently. And while teens who cut do sometimes attempt suicide, cutting episodes are usually not suicide attempts, experts say.

Rather, those who cut are feeling emotional pain and resort to physical self-injury in an attempt to feel better. Cutting releases endorphins, the brain’s feel-good chemical, providing a respite from the pain or helping the teen “feel more alive.”

But not unlike a drug induced high, the endorphin rush from cutting is temporary. When it fades those who cut feel more guilty or depressed than before. To achieve that endorphin rush again, they have to cut themselves some more. (3)

This cycle often causes cutting to become a habit for teens. Kicking the cutting habit can be for some as difficult as ending a drug habit. Although cutting is not physically addictive, the behavior can have a compulsive element, causing a teen to feel that the more she cuts, the more she needs to cut.

Cutting can be, although is not necessarily, associated with a mental disorder like depression, bipolar disorder, anorexia or other eating disorders, obsessive-compulsive disorder and others. It may also be associated with substance abuse and with other impulse control and risk taking behaviors. (1)