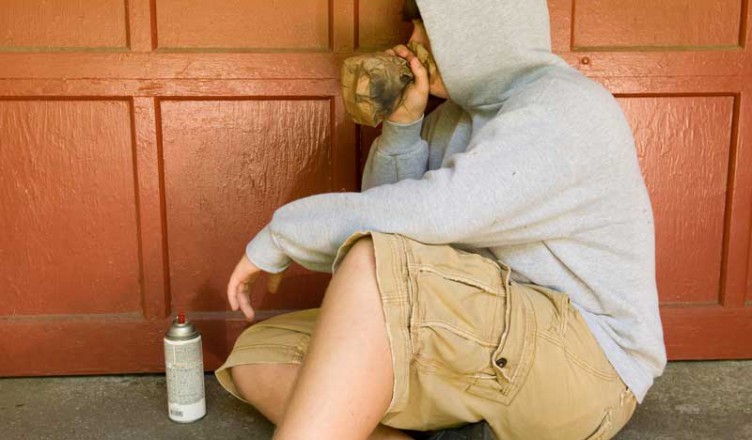 Huffing is a term used to describe the process of inhaling chemical vapors through the mouth and/or nose. Chemicals are poured onto a rag or into a bag and then held over the nose/mouth to be inhaled. They can also be inhaled directly by sniffing vapors from their containers or by spraying directly into the mouth or nose.

There are four basic types of chemicals that are used as inhalants.

Most of these substances occur in the hundreds of everyday products we have lying around our houses. What makes them so dangerous is that they are so readily available and cheap. For this reason, teenagers are not aware of the dangers that exist.

Who participates in huffing?

Huffing is the 3rd most abused substance by teenagers and is an increasing problem in today’s society. According to the National Survey on Drug Use and Health (NSDUH/NHSDA), “inhalants had the youngest average age at first use (16.0 years)” and “75% of recent initiates were under 18 when they first used”.(1)

A similar study done by NSDUH in 2002-2004 showed the following statistics on who is more susceptible to start using inhalants.(3)

What are the effects?

Effects from abusing inhalants can be both short term and long term. These effects vary upon the substance abused and in what concentrations they are abused. The desired effect that teenagers are trying to achieve from using these substances is similar to alcohol intoxication. Of course this feeling comes at a high price. Using inhalants can be very deadly, even the first time they are used.

Long-term effects of huffing are quite damaging to the major organs, including the brain, heart, lungs, kidneys and liver. Huffing can also lead to:

Warning signs of a teen huffing

If you suspect that your teenager might be involved in this form of drug abuse, here are some signs you may want to look out for. Some of these signs are apparent directly after using an inhalant; others show up down the road.

Early education is key in the prevention of this type of abuse. Making our teenagers aware about the dangers associated with inhalants can increase the chances of them not abusing in the first place.

Treatment programs for this specific type of drug abuse are hard to come by as treatment is quite complex. Consult your medical or mental health professional if you suspect a problem exists. Long-term care is necessary as withdrawal symptoms can last for weeks and relapse is quite common.

What is Huffing Sources: